PHILADELPHIA (AP) By KATHY MATHESON — Busloads of tourists line up every day in Philadelphia to take photos with a statue of Rocky Balboa, the fictional heavyweight fighter made famous by Sylvester Stallone. Will they line up for pictures with a sculpture of real hometown champion Joe Frazier? “Properly promoted, I think it would be much, much bigger than Rocky,” said Robin Hazel, who was visiting the city recently from Ottawa, Canada. “Rocky is great, it’s a movie. But Joe Frazier’s real. And he’s Philadelphia.” Artist Stephen Layne is finishing up a 9-foot-tall clay version of “Smokin’ Joe” that captures Philly’s local hero in mid-punch. Frazier became the first fighter to beat Muhammad Ali when heoutslugged “The Greatest” for the heavyweight title in 1971. Steering clear of the victorious, raised arms stance of the Rocky statue — which was originally a prop in “Rocky III” — Layne instead found his spark in a photo of Frazier flooring Ali with his powerful left hook. The moment captured in the sculpture reflects the work ethic of Frazier and the city he called home, said Layne.” That pose of glory … the Rocky pose, I don’t think that’s quite the vibe of Philadelphia,” Layne said while working in his studio in the Fishtown neighborhood. Layne, who was raised here, both attended and taught at the city’s esteemed Pennsylvania Academy of the Fine Arts. He said he felt drawn to the Frazier project because of the shared Philadelphia connection and a sense that artists, too, must be fighters to survive in their field. “It was so obvious that (Frazier) was completely willing to get beat up … so that he could achievewhat he wanted,” Layne said. “And I thought that was just an inspirational thing to watch.” Frazier won the 1964 Olympic gold medal in Tokyo and later finished with a professional record of 32-4-1, with 27 knockouts. Two of the losses were epic rematches with Ali, including the “Thrilla in Manila” in 1975.

When Frazier died of liver cancer three years ago at age 67, his place had long been cemented in sports history. Still, a public fundraising campaign for his memorial generated few contributions, so four major donors ponied up most of the $160,000 needed for the statue and its maintenance fund. Two of Frazier’s daughters, Weatta Collins and Renae Martin, said they are thrilled with Layne’s work, noting the artist has been receptive to feedback from family members as the piece progressed. “It’s really long overdue,” Collins said. “We’re very happy that it’s finally being done.” Layne plans to finish the clay work by the end of September. The statue will then go through a molding process before being cast in bronze and installed at Xfinity Live, an entertainment complex by the city’s three sports stadiums. Frazier fought near the site at the now-demolished Spectrum. The unveiling of the 1,800-pound likeness is expected next spring, probably in April, said Richard Hayden, an attorney for Xfinity Live. “It’s a bit silly to have a statue of someone that was never a professional boxer,” du Croix said of Rocky. “It made the city of Philadelphia very famous, but they should have a statue of a great boxer — of Joe Frazier.” 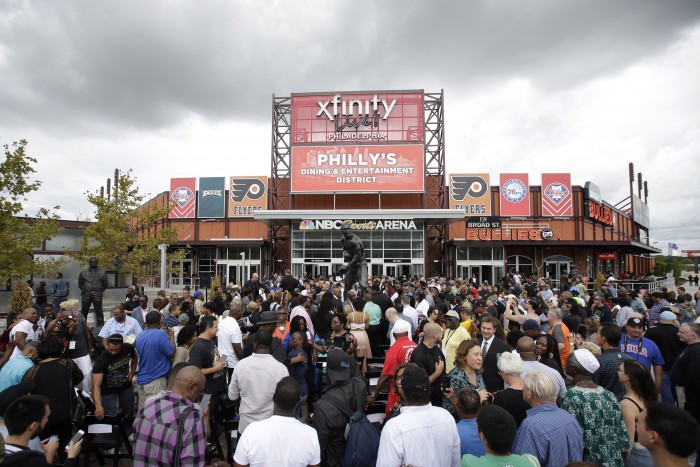